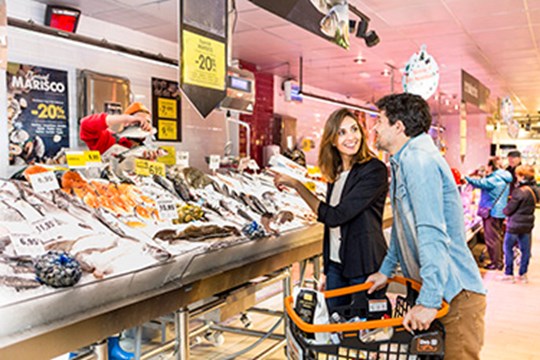 DIA is a Spanish multinational company specialising in the distribution of food, household and personal care products. DIA Group is a leading proximity food retailer network with 6,626 own and franchise stores in Spain, Portugal, Brazil and Argentina.

DIA sources from local suppliers and serves everyday grocery needs of 20 million loyal customers thanks to its 39,372 employees around the world. In 2017 Letterone acquired an initial shareholding in DIA, becoming a minority investor. This has now increased to 69.76% of DIA’s total share capital.

It operates in Spain, Portugal, Argentina and Brazil with close to 6,626 stores

Since L1 became the company’s reference shareholder in May 2019, DIA has focused on three key initial strategic priorities:

Throughout 2019, DIA operated in a highly disrupted and volatile business, financial, and corporate environment, which took a substantial toll and affected the operating performance. DIA’s net sales decreased by 9.3% to €6.87bn down 2.2% in local currency. Like-for-like sales decreased 7.6%, driven by a -0.7% in the number of tickets and a 7.0% decline in the average basket, showing the strong resilience of its customer base.

In the first quarter 2020 – despite the impact of COVID-19 – DIA delivered stable top line performance, with like-for-like improvement continuing into the first months of Q2, showing early positive results of its business transformation plan. This performance was supported by continued cost discipline and underpinned by a strengthened financial structure with positive cash flow, lower net debt with an enhanced maturity profile, and improved working capital.

In October 2018, it became clear that DIA was undergoing serious financial difficulties. In February 2019, L1 Retail, which owned 29% of the company at the time, announced a voluntary tender offer and comprehensive rescue plan to secure the future of DIA.

L1 Retail believed that under the right leadership and governance, DIA could deliver a transformation and re-establish its position in the Spanish retail market to the benefit of the Spanish consumer.

The L1 Retail rescue plan consisted of three integrated components. First, a voluntary tender offer (“VTO”) for the acquisition of all the shares in DIA that it did not already own at a price of €0.67 per share, a significant premium of 56.1% to the closing price on 4 February 2019. Second, a commitment to support a capital increase of up to €500m to achieve a viable long-term capital structure, which was conditional upon the completion of the VTO and reaching a satisfactory agreement with DIA’s lending banks. Third, a comprehensive transformation plan, led and overseen by L1 Retail, which was and is expected to deliver a turnaround of the business over a 3-5 year period.

In November 2019, DIA completed its capital increase by capturing €605m in the market and resulting in an increase in L1 Retail’s ownership from 69.8% to 74.8%. The successful capital increase reflected the financial markets’ endorsement of DIA and the L1 Retail-led turnaround plans, underlining stakeholders’ confidence in DIA’s future.