The first sovereign credit rating to directly include climate science shows that many national economies can expect downgrades to occur within a decade unless action is taken to reduce emissions.

Sovereign ratings assess the creditworthiness of nations and are a key gauge for investors. Covering over US$66 trillion in sovereign debt, the ratings – and agencies behind them – act as gatekeepers to global capital.

A team of economists led by University of Cambridge used artificial intelligence to simulate the economic effects of climate change on Standard and Poor’s (S&P) ratings for 108 countries over the next ten, thirty and fifty years, and by the end of the century.

“It is imperative that they are proactive in reflecting the much larger consequences of climate change now.”

Researchers say the current tangle of green finance indicators such as ‘Environmental, Social, and Governance’ (ESG) ratings and unregulated, ad hoc corporate disclosures are detached from the science – and the latest study shows they don’t have to be.

“By connecting the core climate science with indicators that are already hard-wired into the financial system, we show that climate risk can be assessed without compromising scientific credibility, economic validity, or decision-readiness,” Agarwala said.

The team, including former S&P chief sovereign ratings officer Dr Moritz Kraemer, found that if nothing is done to curb greenhouse gases then 63 nations could be downgraded by over a notch on average by 2030.

Germany, India, Sweden and the Netherlands would all drop three notches, with the US and Canada falling by two and the UK by one.

By comparison, the economic turmoil caused by the Covid-19 pandemic resulted in 48 sovereigns suffering downgrades by the three major agencies between January 2020 and last month.

“Finance ministers are already panicky due to the fiscal consequences of the pandemic,” said Agarwala. “They should take this opportunity to invest in growth-stimulating decarbonisation and environmental restoration now, to prevent climate change from further tanking the public finances.”

The findings are published as a Bennett Institute for Public Policy working paper.

The study suggests that adherence to the Paris Climate Agreement, with temperatures held under a two-degree rise, would have no short-term impact on sovereign credit ratings and keep the long-term effects to a minimum.

Without serious emissions reduction, however, 80 sovereign nations would face an average downgrade of 2.48 notches by century’s end, with India and Canada among others falling over five notches, and China dropping by eight.

The researchers call their projections “extremely conservative”, as the figures only track a straight temperature rise. When their models incorporate climate volatility over time – extreme weather events of the kind we are starting to witness – the downgrades and related costs increase substantially.

“The majority of countries in our sample will suffer downgrades by 2030 if the current trajectory of carbon emissions is maintained. Virtually all countries, whether rich or poor, hot or cold, will be downgraded by 2100,” said co-author Dr Kamiar Mohaddes from the Cambridge Judge Business School and King’s College, Cambridge.

"Keeping to the Paris Agreement will be tough, but our estimates strongly suggest that stringent climate policy will significantly reduce the impact on ratings.”

The research suggests there will be long-term climate effects for sovereign debt even if the Paris Agreement holds and we reach zero carbon by century’s end, with an average sovereign downgrade of 0.65 notches and increases in annual interest payments of up to US$33 billion globally by 2100.

The team also calculated the knock-on effects these sovereign downgrades would have for corporate ratings and debt in 28 nations. They found that corporates would see additional costs of up to US$12 billion globally by 2100 under the Paris Agreement, and up to US$62 billion without action to reduce emissions.

“We need to create credit ratings with ultra-long-term horizons, and the latest climate science is essential to doing this,” Kraemer said.

The research team say they were guided by the “overarching principle” to stay as close as possible to both climate science and “real world” financial practices.

AI models to predict creditworthiness were trained on S&P’s ratings from 2015-2020. These were then combined with climate economic models and S&P’s natural disaster risk assessments to get “climate smart” credit ratings for a range of global warming scenarios.

“AI has the potential to revolutionise how we do climate risk assessment and ESG ratings, but we must ensure the evidence base is baked-in,” said co-author Matt Burke, a researcher at the Bennett Institute for Public Policy.

While developing nations with lower credit scores are predicted to be hit harder by the physical effects of climate change, nations ranking AAA were likely to face more severe downgrades, according to the study. Economists say this fits with the nature of sovereign ratings: those at the top have further to fall.

“We are delighted to have sponsored this ground-breaking research. This much needed breakthrough will allow the financial community for the first time to understand the impact of long-term climate effects on sovereign and corporate debt.”

The research was also funded by the International Network for Sustainable Financial Policy Insights, Research and Exchange (INSPIRE).

The global climate-induced sovereign ratings changes predicted to occur by the year 2100 if the Paris Agreement holds and temperature rises are kept to below two degrees. 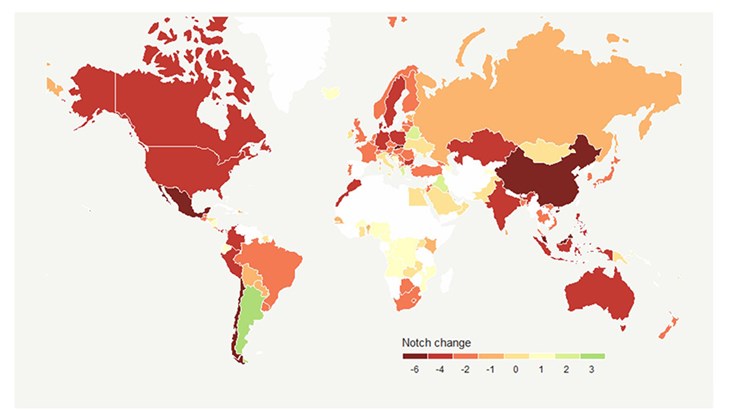